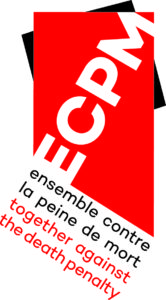 Since 2000, Ensemble contre la peine de mort acts to fight against the capital punishment all around the world. The organization encourages the universal abolition by the creation and circulation of publications and pedagogic tools, as part of public campaigns and lobbying on governments at both national and international level.

ECPM has initiated the creation of the World Coalition against the Death Penalty (WCADP), member of its Board and organized every three years the World Congress against the death penalty (Strasbourg 2001, Montreal 2004, Paris 2007, Geneva 2010 and Madrid 2013, Oslo 2016).

ECPM has the ECOSOC Consultative Statut since 2016